A way with words - connecting the traditional with the digital

In his essay ‘Story-telling: The Gaelic tradition’ Declan Kiberd states that for “the past eighty years in Ireland, the short story has been the most popular form of all literary forms with readers,” and that it has “been the form most widely exploited by writers”.  Kiberd highlights that Patrick Pearse saw with “uncanny accuracy” that the future of Irish literature lay in the short story rather than the folk tale.  That essay, which formed part of a collection on the Irish short story, was published in 1979[i].  Over thirty years later the short story form continues to be widely exploited by Irish writers today. 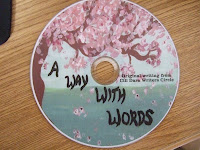 Cill Dara Writers Circle taps into that rich literary tradition with its anthology A Way with Words.  Each of us sat down with paper and pen or computer and blank screen to carry out the solitary business of writing yet we also tapped into our oral tradition because each month we read our stories to each other.  The combination of the solitary act of writing with the communal act of public reading is reflected in our first CD anthology.
Kiberd goes on to state that for Pearse “the virtue of the short story was that it permitted intense self-expression.”  The CD mostly contains short stories, along with some poetry, and you will find that our stories cover a number of personal themes.  In ‘Waiting’ the narrator is awaiting her judgement and the focus is on time and its oppressive effects.  The story ends with a shocking twist.  ‘1954 Time’ another story that focuses on time is a childhood memoir that recalls an era when life was slower and more innocent.  It locates itself in the Curragh but the pace of life can be imagined anywhere.  ‘Well if Sinead O’Connor can live with it’ is a story of self-empowerment in the face of the harsh effects of chemotherapy.  The narrative voice asks the listener to image what it feels like to lose your hair and to have the courage to shave it off.  ‘Glencree’ is story about romantic loss in a place that is centred on reconciliation.  It uses the landscape to mirror the internal world of the narrator.  ‘Reaching the top’ is a childhood memoir that focuses on misadventure and the tricks that children can get up to when they are intrigued by an object of exploration.  ‘Molly’ is a relationship story between its owner and beloved pet and the effects of that lose when the pet dies.  ‘The stranger’ is a story of family betrayal by a mother towards her daughter but also of new beginnings when she discovers another living relative.  ‘Paper dreams’ is a humorous story on one woman’s obsession with decent loo paper.  It relates back to the pre-Celtic tiger era when life was not so luxurious.  Finally, ‘Anne and Joseph’ focuses on the effects of mental health and its impact on a marriage and a family.
The poems are a mixture of the personal and collective so in ‘Casualty II’ the narrator, using striking imagery and self-deprecating humour, manages life with a broken arm until halted by a jar of jam.  Using rhyming couplets, the patroness of Kildare is celebrated in ‘Saint Bridget of Kildare’.  The effects of ageing, in particular senility is sensitively revealed ‘In a far of place’.  The self is examined in ‘The space that lies between’ and ‘The rising sun’ and finally the folkloric is juxtaposed with the everyday in ‘The Golden ball.
Our stories and poems pay homage to our traditional literary roots but equally they embrace the digital age.  Our work is recorded on CD which was arranged by Brenda Drumm, the co-ordinator of Cill Dara Writers Circle.  Without her patience, time and trusty recorder A Way with Words would have remained a concept rather than a reality.  In addition, we are blessed that Brenda has the vision and know how to use and embrace social media.  At present we are the only creative writing group to have an anthology of work up on audioboo.
On Friday September 23, Culture Night which celebrates “culture, discovery and heritage”, will run across 30 regions around Ireland and we are delighted to be a part of this special event.  A Way with Words will be officially launched by bestselling novelist Colette Caddle that night in Kildare library from 7pm to 9pm.  The event is free and full details can be found on the Culture night brochure. Copies of the CD can be purchased on the evening or you can contact us through our Facebook page.

We look forward to seeing you there.

Thanks for your comment, it will be added to the site shortly once it has been moderated.

The Bag Lady
I write, I read, I pontificate - hence the blog. I can be found tweeting randomly @h_a_quinn. A sample of my stories and poems can be heard at http://audioboo.fm/helenquinn or at http://audioboo.fm/AWayWithWords. I'm a member of Cill Dara Writer's circle and a co-facilitator with WriTeen Scene, a creative writing group for teenagers.