Beauty; in the eye of the cardholder? 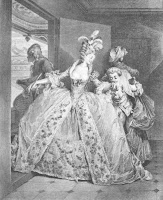 Five hours (and who can do it less in?)
By haughty Celia spent in dressing,
The goddess from her chamber issues,
Arrayed in lace, brocade, and tissues.
(excerpt from The Lady’s Dressing Room by Jonathan Swift)


Written in 1732, The Lady’s Dressing Room deconstructs and mocks the fashionable dress of court women by detailing and parodying the products that created the ‘haughty Celia’.  Consumerism was rampant amongst the eighteenth century aristocracy which trickled down to the remaining social classes in England [1] causing Swift to challenge this rise of materialism in The Lady's Dressing Room.  The poem challenges manufactured female beauty and mocks those men who fall for it.

By ensuring that the 'goddess' Celia is absent from the narrative, the poem opens with Strephon sneaking into her dressing room and peering at the products that 'create' her.  With gleeful malice, the narrator discloses the underbelly of her contrived beauty because rather than getting closer to the object of his desire, Strephon sees that her make up brushes are full of dirt, dandruff and dead hair and her towels are “Begummed, bemattered, and beslimed,”.  The poem takes a Pandora's box approach when Strephon cries in shock after sticking his hand in a wooden chest when he discovers: “Oh! Celia, Celia, Celia shits!”  The narrator admonishes the young man’s naivety when he declares that all: “Such gaudy tulips raised from dung” thus mocking the obsession with idealised beauty.
This idealisation and comodification of the body is rampant today.  A few days ago I was buying a paper and as per usual my eye was drawn to the rack of women's magazines.  To date it is the same headlines: what celeb has lost weight, gained weight, married, divorced, dated, etc. I noticed one of the headlines congratulating Ulrika Johnson on her new body and looking fabulous at over 40, I felt momentarily inadequate. This changed to annoyance when I read further on that she had spent around €14,500 to ‘create her new body’. I realised that although she has always been slim, she achieved the ‘perfect body’ through surgery.  In other words she did not ‘create her body’, a plastic surgeon did. Furthermore, she looks fabulous because she can afford it. Similarly, Demi Moore is reported to have spent in the region of €150,000 on her body. Madonna denies having any plastic surgery but she has not aged since her mid 30s and virtually all the celebrities represented in the media have perfect skin, perfect teeth, perfect hair and perfect bodies or so we are led to believe.
These men and women become successful based on their natural good looks and their careers are dependent on their beauty. Meanwhile, the rest of us merely gaze at their images feeling inferior.  It is important to consider what is the emotional cost for these celebrities to maintain the perfect look and how does this effect the rest of society? Apart from the assistance of a plastic surgeon, these celebrities have nutritionists, personal trainers, cleaners, nannies, and all manner of services so they can focus on their appearance. Furthermore, when they are photographed, the images are touched up and resized to hide blemishes or any excess padding.  If it is a professional shot in a glossy magazine or an advert, extra lighting is used to create a soft, youthful effect. It would prove difficult for a modern day Strephon to peer below the underbelly of their artifice and we mere mortals are competing with an adobe Photoshop image.  It is time we woke up and realised that ‘these gaudy tulips’ are constructed similar to their eighteenth century counterparts. Beauty, it would seem, truly is in the eye of the cardholder these days.

Thanks for your comment, it will be added to the site shortly once it has been moderated.

The Bag Lady
I write, I read, I pontificate - hence the blog. I can be found tweeting randomly @h_a_quinn. A sample of my stories and poems can be heard at http://audioboo.fm/helenquinn or at http://audioboo.fm/AWayWithWords. I'm a member of Cill Dara Writer's circle and a co-facilitator with WriTeen Scene, a creative writing group for teenagers.